With such a varied landscape of lochs, glens, hills, mountains and coast, Loch Lomond & The Trossachs National Park is the perfect playground for all kinds of people!  From outdoor enthusiasts, to artists, writers and poets, dog-walkers to those who just appreciate an awesome view or some peace and quiet!

The National Park encompasses around 720 sq miles (1,865 sq km) of some of the finest scenery in Scotland and is split into four distinct areas: Loch Lomond, the Trossachs, Breadalbane and Cowal.. 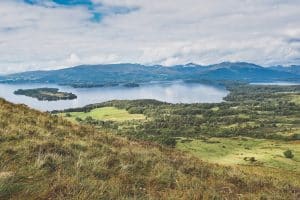 It is a place of contrasts, from rolling lowland landscapes in the south to high mountains in the north, and has many lochs and rivers, forests and woodlands. It is also a living, working landscape which has been influenced by people for generations and is visited and enjoyed by many for its recreational value.

The Loch Lomond & The Trossachs National Park became fully operational on 19 July 2002 and was officially opened by Princess Anne on 24 July 2002.

Some things you might not know about the National Park

The Park has a rich place-name heritage, with hundreds of names coined in Gaelic.

Loch Lomond & The Trossachs is at the southern edge of the Gàidhealtachd (or ‘Highlands’), the largely mountainous part of Scotland, in which Gaelic was the dominant tongue following its retreat from the Lowland regions of the south and east.

The name Loch Lomond was earlier Loch Leamhain (loch LEFin), named after the River Leven ‘elm water’. However, the loch is overshadowed by Beinn Laomainn (bayn LOEUmin) ‘beacon mountain’, presumably a site for beacon fires in ancient times, and the mountain’s name was ultimately adopted for the loch itself. Beinn Laomainn and Loch Laomainn became Ben Lomond and Loch Lomond in English.

The Trossachs is an anglicisation of Gaelic Na Tròisichean (nuh TRÒSHeechun) ‘the places lying athwart’. The name strictly applies to the hills dividing Loch Katrine from Loch Achray, which lie at a right angle to the glens containing the lochs.

You can find out more about the park’s history and heritage on the National Park website (not sure how to say that in Gaelic!)

Outdoor learning in the National Park 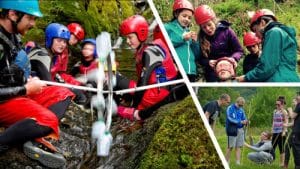 Outdoor learning not only enables an awareness of the natural environment – encouraging care and appreciation of it – being immersed in nature has fantastic health benefits too and can improve the physical, mental and emotional wellbeing of children and adults.

You might be surprised at what you can learn in the park.  As well as the more obvious topics encompassing nature, wildlife, history and landscapes, there are also ample opportunities to learn more about the STEM subjects (Science, Technology, Engineering, Maths).  Take for example, generating power from water or wind.  The park provides a perfect classroom to conduct experiements, and to replicate (on a much smaller scale) how energy is produced and ends up in our homes.  In Your Element has run a number of these sessions in the past for both school and college groups.

Looking after the park…. 5 wild challenges 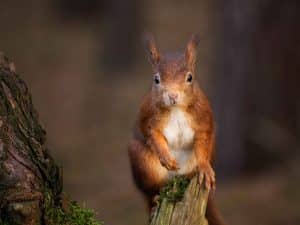 With such an important asset comes a great responsibility.  Whether you work, rest or play in the National park, we all have a responsibility to help look after it, maintain it, and do our utmost not to damage it.  The National Park authority has a list of priorities for 2020 and beyond and you can find out a bit more about what they are – 5 wild challenges

When will you visit?

If you’ve not visited the Loch Lomond National Park yet, there really is something there for everyone.  Whether you have a day or a 2-week holiday, you should make a point of exploring the area.  Bring your walking boots, a canoe, your bike or your camera, and take in one of Scotland’s most awesome locations.

Previous postThings to do in the October holidays
Next postTreeZone in the dark for Halloween!