Is Britain wrapped in cotton wool? It’s a question posed by the authors in this book which looks at how legislation originally introduced with the laudable aim of reducing workplace deaths and injuries is seen to permeate every walk of life, including the great outdoors.

Professor Ball of Middlesex University and his co-author Laurence Ball-King both have expertise in risk management and use this book to examine whether the application of health and safety criteria to public activities such as adventurous pursuits, including climbing and mountaineering, is working satisfactorily.

The book is not solely devoted to adventure activities, though there is a whole chapter which looks at the sector. Rather, its aim is to argue whether health and safety policies, and risk assessments in particular, are appropriately applied to general activities.

As the authors say: “This book seeks to inform and re-enfranchise people who feel they have lost out in some way through strictures of health and safety, and secondly to support a more considerate application of risk assessment, specifically in the domain of public space and activities, from whence most of the friction seems to originate.

“In doing this, the aim is not to discredit health and safety, but to aid understanding.”

The pair point out that preventing injury has become paramount in many professionals’ minds, and the consequences of depriving youngsters and others of the benefits of healthy, if risky, activities is overlooked. “At the societal level, the impact upon generations of children and young people is nothing short of alarming,” they say.

Allowing children to do what previous generations did: playing with water, climbing trees, riding bikes and skateboards and using playgrounds, benefits not only their physical health, but also develops their own ability to evaluate everyday risks and formulate their methods of dealing with these. 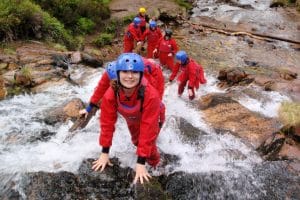 Ball and Ball-King use an example of the ‘safe’ playground. The British Standard for equipment says that ladders and stairs should have equally spaced rungs and constant gradient. But Danish Playground Association president Helle Nebelong says: “Standardised playgrounds can be dangerous. When the distance between ladder rungs is the same, the child has no need to concentrate. Play becomes simplistic and children no longer have to think about their movement. The ability to concentrate on estimated distance, height and risks needs practice.”

The authors also contend that risk assessment is often subjective, and carried out by people who don’t have knowledge of the specific activities being carried out. Bodies often ‘buy in’ the expertise from outside practitioners.

Fear of the increasing tendency towards litigation drives much of the thinking on risk assessments. This, coupled with the fact that the Health and Safety at Work Act 1974, framed as a piece of industrial legislation, also extended the duty to reduce risk to those not in the employment of companies and other individuals and bodies has led, the writers say, to the extension into public spaces and activities a culture of risk aversion that was unintentional in the original act.

Adventure activities are different, they point out, involving significant levels of risk with potentially very serious consequences. “Yet their followers, of whom in the UK alone there may be hundreds of thousands, voluntarily and wilfully engage in them.

“The risk itself is such an integral part of the activity, and indeed some have claimed it is even the key reason why people take part,” the authors contend.

Robert Stokes
Fascinating article. As an import from the states - infamously litigious as we are - I find the British obsession with "Health & Safety" to be perplexing at times. A few weeks ago my wife and I took our 15 year old neighbor to tennis practice at an indoor facility on a cold Saturday morning. I mentioned that it must be nice to play outside come summer, but it turns out they are never allowed. This time of year it is of course too cold for playing tennis outside, but once it has warmed up they can't play outside due to the risk of sunburn. Did I mention this is in Aberdeen? I can just imagine the stuffed shirt, mouth breathing desk jockey that thought that one up - but I prefer not to.
Calum Rogerson
Hi Robert, thanks for the comment. That does seem an extreme case of being over-protective, but I know things like that happen. There are obviously some good reasons behind health and safety guidelines. it's just frustrating that they perhaps go a bit too far sometimes. Calum In Your Element