Without doubt, Inverpolly is one of Scotland and the UK’s last true wilderness areas.

It’s the name given to a large area of western Sutherland in the Northwest Highlands of Scotland, north of Ullapool.  The area contains several prominent hills, rising up from a rough landscape of bogs and lochans.  For many years the area was a designated National Nature Reserve but since 2004, the designation has been limited to the area of Knockan Crag.

Most of Inverpolly forms part of the 400 km2 Assynt Estate, with major peaks in the area including one of Scotland’s most 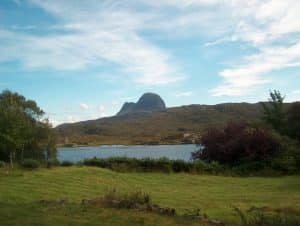 distinctive mountains, Suilven, along with the no less impressive Stac Pollaidh and Cul Mòr.

At the heart of Inverpolly lies Loch Sionascaig and Loch Veyatie, both accessible by canoe or kayak offering some stunning canoe touring for those with a real sense of adventure and need for getting away from the crowds.

If you consider that this area of Scotland has rocks dating back almost as far back as the we can go geologically, this area has got lots to offer the geologist as well as those seeking a natural playground.

If you take the iconic Suilven as an example of what you might find, its steep slopes are formed of Torridonian sandstone, sitting on a landscape of Lewisian Gneiss. The surrounding rocks were eroded during an episode of glaciation leaving Suilven poking above the level of the ice sheet, known as a nunatak.  The flow of ice then created the distinctive narrow teardrop plan, while carving and scouring the vertical sides of the mountain.  It really needs to be seen to appreciate how great a mountain this really is. 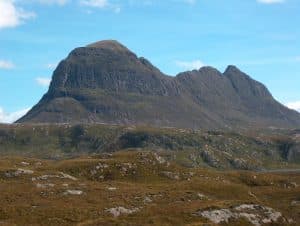 From the coast to the west Suilven looks like a large grey pillar, hence the name which it was given by sea-borne Vikings. From the inland side the mountain has more of the appearance of a steeply-sided pyramid.

Access to the area does involve some effort given its location.  It’s a fair drive from anywhere with Inverness being the largest major conurbation within easy driving distance.  However, even if you do drive up that way and drive through the amazing landscape (which almost feels like you’ve been dropped on a different planet sometimes), to really appreciate it, you need to get out of your vehicle and walk, bike or canoe into the large, remote expanses of land to get a feel for the real Inverpolly.

It’s really worth finding out a bit more about the area and without doubt, visiting it for yourself.

Try the Scottish Natural Heritage website, The John Muir Trust (who actively protect and manage some of the area) and Visit Scotland if you want to find out more about it.  It really is worth a visit and hope that this might just prompt you to check it out.