Badenoch – what and where is it?

Badenoch – what and where is it?

Aviemore & Badenoch covers the area sometimes known as Badenoch and Strathspey.  Badenoch (from the Scottish Gaelic Bàideanach meaning drowned land) is often driven through or viewed from a train window and can look empty and wet as you pass by.  The area has a lot more to it though.

It includes a broad area of Scotland that roughly follows the busy A9 road, and takes in places like Dalwhinnie, Newtonmore, Kingussie, Aviemore, Nethy Bridge and Grantown on Spey.   The surrounding area is an outdoor enthusiast’s paradise with lots of adventures to be had in many different forms.  In Your Element have an Aviemore base so spend a lot of time taking people on mini adventures in the area.

Aviemore is a year-round, bustling, tourist destination and first developed with the coming of the railways in the late 1800s.  It later developed as a ski resort in the 1960s.  In more recent years Aviemore has done much to overcome the 1960’s concrete architectural image it had, and looks a very different place now.

The Cairn Gorm Ski Centre is Britain’s biggest ski area with 28 runs and over 35km of pistes, and is just eight miles from Aviemore.  Thousands of snow lovers head there every season.

Aviemore is, unsurprisingly, popular with walkers and mountaineers, with spectacular walks and climbs aplenty in and around the impressive Cairngorm Mountains.  Mountain bikers have endless route options to explore the hills and glens too, with lots of multi-day bikepacking routes to choose from.  Canoiests and Kayakers can explore the River Spey, one of Scotland’s great touring rivers.  On the other side of the A9 from Aviemore is the Craigellachie National Nature Reserve, another great place to stretch the legs and immerse yourself in nature. 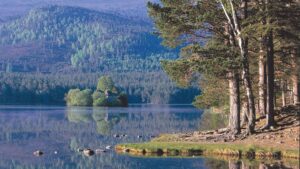 South-east of Aviemore is the nearby Rothiemurchus Estate, a working Highland estate, which demonstrates how land can be managed to best-effect, in many different ways.   It also offers family-friendly activities like archery, bike hire, guided ranger tours, canoeing and visitors can fish for trout in the River Spey.

At Carrbridge, nine miles to the north of Aviemore, is the Landmark Visitor Centre telling the history of Scotland in a fun and immersive way.   It also offers lots of fun activities for young families seeking a fun day out.  Carrbridge itself is well worth visiting, and comes complete with the remains of an old arched bridge over the river – well worth a photo stop. 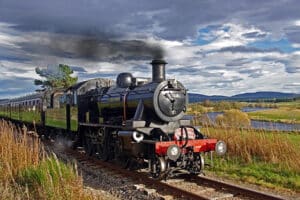 Eight miles north east of Aviemore is Boat of Garten with nearby Loch Garten Osprey Centre managed by the RSPB.  The Strathspey Railway runs between Boat of Garten and Aviemore and it’s possible to canoe from Aviemore to Boat of Garten, then get the steam train back to Aviemore for a great day out with a difference.

Grantown on Spey lies 15 miles north east of Aviemore and is a popular destination all year round.  It was a favourite with Queen Victoria and its dry, bracing climate was advised as a tonic for those Victorians with a nervous disposition.  Nowadays, Highland fresh-air is good for everyone, nervous disposition or not!  The town has comfortable hotels and makes a great base for exploring the area year-round.

To the south of Grantown on Spey, on the less travelled south side of the River Spey, is the attractive village of Nethy Bridge.  On the opposite side of the Spey is Broomhill Railway Station, the northern stop on the Strathspey Railway, where you can catch the Strathspey steam train back to Aviemore through Boat of Garten.  A little north of Nethy Bridge stands the impressive remains of Castle Roy. The Abernethy Forest, south of the village, is home to the RSPB’s Loch Garten Osprey Centre, where you can occasionally see Ospreys catching fish from the loch 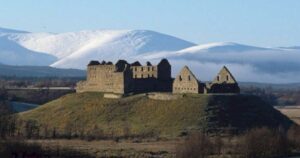 Kingussie attracts visitors all year round and just across the river to the east of the town are the ruins of Ruthven Barracks.  The site offers excellent views of the surrounding countryside and was first occupied as a castle in the 1200s.  The Barracks were built in 1721 by the Government as part of a scheme to keep control of the Highlands after the 1715 Jacobite rebellion.

Nearby Newtonmore has a full range of tourist services, including the excellent Clan Macpherson Museum with its display of clan artefacts.  The Highland Folk Museum at the other end of Newtonmore is a superb day out with a large collection of buildings that give a fascinating insight into Highland life in years gone by. 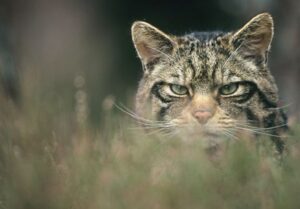 North from Kingussie, heading back towards Aviemore, the old A9 remains in use as the B9152. En route to Aviemore and just before the village of Kincraig, lies the Highland Wildlife Park, where visitors can experience Scottish wildlife, as well as endangered animals from mountainous and tundra regions around the world.

So, the next time you drive north up the A9 or take the train through Aviemore, have a good look around, or stop and explore some of what this area has to offer.